Migrating workloads to the public cloud on a tight schedule

Our client is a provider of railcar leasing services and internet-based (ARMS) fleet management services in the United States. They were on a tight schedule to move out of one of their offices, which housed all of their IT infrastructure. But moving the physical hardware meant disrupting both their customers' and internal users' work. Also, it would take a long time to set up their on-premise environment in a different location. This was unacceptable from a business standpoint.

A much more viable alternative consisted of migrating their workloads to the public cloud. However, carrying out such migration without any in-house expertise seemed an almost impossible feat.

Enter 3XM Group. Our cloud engineers studied the environment and applications and developed a plan to move them to the Amazon Web Services (AWS) cloud platform by the established deadline.

The client’s workloads were Windows-based and ran in an Active Directory setup. These workloads included their online web application (built on IIS, the .NET Framework, and SQL Server) and several desktop applications accessed via the RDP protocol. Most of these applications were packed into a single server.

This project became an opportunity to improve the client’s architecture and solve some of the issues caused by their tightly-coupled setup. Instead of performing a traditional lift-and-shift migration, our engineers opted to build a new environment on AWS, replicating all the existing application data and configurations.

The implemented AWS solution, depicted in the diagram below, was based on EC2 Windows Instances and the AWS Directory Service. 3XM Group's engineers designed the networking aspects of the solution according to best practices. The goal was to provide secure access to desktop applications via a Remote Desktop Gateway while isolating the application and database servers from the Internet. Our client’s employees who relied on Active Directory authentication were granted access to the environment via the AWS Client VPN service to their workstations.

Once the cloud infrastructure was set up and validated using Terraform, our specialists copied all the on-premise data onto the AWS servers and then pointed the DNS records to the new environment. This allowed the client to start operating directly on AWS without any of its users noticing the change. 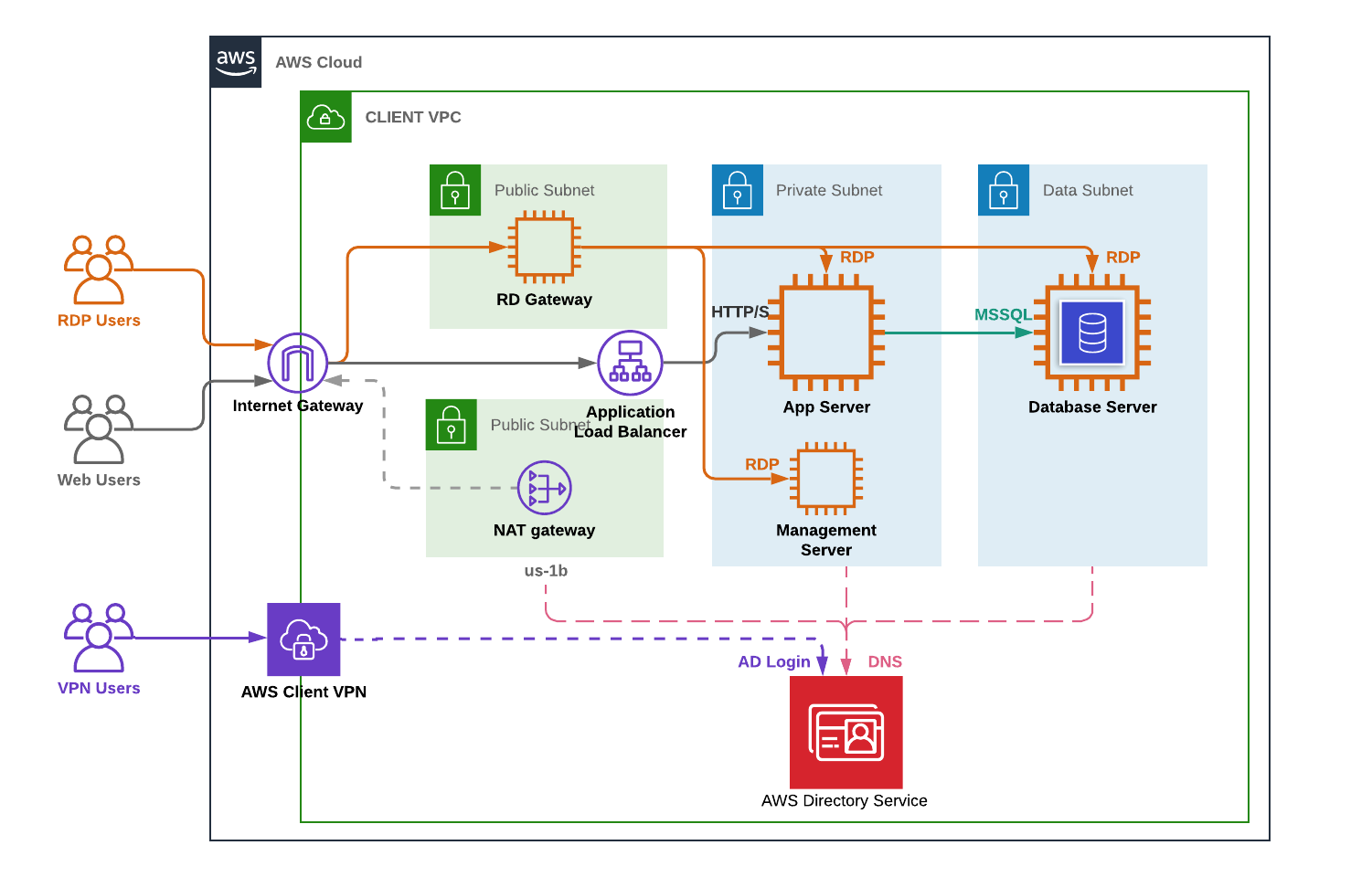 3XM Group completed the migration to AWS in alignment with the client’s business schedule, allowing them to move out of their old office with no impact on their users. Adopting the public cloud came with the added benefit of reducing the operational overhead involved in traditional IT infrastructure management. AWS's top-notch virtualization and network technologies, as well as the architectural improvements introduced by our team, also gave the client's workloads a noticeable performance boost. As reported by their own IT staff, the applications are now running faster than ever before.

Last but not least, the Terraform code delivered by 3XM engineers gave the client a means to take full advantage of the on-demand and self-service nature of the cloud. "AWS makes infrastructure maintenance tasks effortless and reliable, with tools such as scaling out servers and replicating environments.